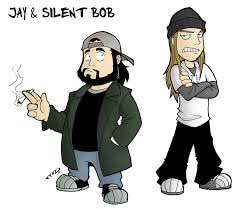 Jay and Silent Bob are fictional characters portrayed by Jason Mewes and Kevin Smith, respectively, in Kevin Smith's View Askewniverse, a fictional universe created and used in most of the films, comics, and television programs written and produced by Smith, beginning with Clerks. The characters are shown spending most of their time selling marijuana in front of the convenience store in the Clerksfilms. In Clerks: The Animated Series, they also sell illegal fireworks. Make 4 interest-free payments of $15.00 fortnightly and receive your order now.